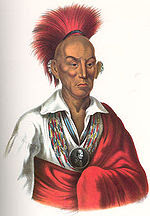 Chief Black Hawk
Birth
Makataimeshekiakiak was born in spring 1767, in in the village of Saukenuk on the Rock River, in present-day Rock Island, Illinois. He was born into the Sauk Native American tribe.
War Chief
Black Hawk became a war chief because of his prowess as a war leader.  Although Black Hawk was never a civil chief, he killed his first man by the time he was 15 years old and was appointed a chief because of his abilities to lead war parties. Before his 18th birthday he had led war parties to victory.
The civil or ceremonial chief of the Sauk tribe was Quashquame. Quashquame is best known as the leader of the 1804 delegation to St. Louis that ceded lands in western Illinois and northeast Missouri to the U.S. government under the supervision of William Henry Harrison. This treaty was disputed, as the Sauk argued the delegation was not authorized to sign treaties and the delegates did not understand what they were signing. Black Hawk, a frequent visitor to Quashquame's village, lamented this treaty in his autobiography. The Sauk and Meskwaki delegation had been sent to surrender a murder suspect and make amends for the killing, not to conduct land treaties. The treaty was a primary cause of Sauk displeasure with the U.S. government and caused many Sauk, including Black Hawk, to side with the British during the War of 1812.
Black Hawk War
Angered by the loss of his birthplace, between 1830 and 1831 Black Hawk led a number of incursions across the Mississippi River. He was persuaded to return west each time without bloodshed. In April 1832, encouraged by promises of alliance with other tribes and the British, he moved his so-called "British Band" of more than 1500 people, both warriors and non-combatants into Illinois. Finding no allies, he attempted to return to Iowa, but the undisciplined Illinois militia's actions led to the Battle of Stillman's Run. A number of other engagements followed, and the militias of Michigan Territory and Illinois were mobilized to hunt down Black Hawk's Band. The conflict became known as the Black Hawk War.
After the Black Hawk War - Tour
Following the Black Hawk War, with most of the British Band killed and the rest captured or disbanded, the defeated Chief Black Hawk was held in captivity at Jefferson Barracks with Neapope, White Cloud, and eight other leaders. After eight months, in April 1833, they were taken east, as ordered by U.S. President Andrew Jackson. The men traveled by steamboat, carriage, and railroad, and met with large crowds wherever they went. Once in Washington, D.C., they met with Jackson and Secretary of War Lewis Cass. Afterward, they were delivered to their final destination, prison at Fortress Monroe in Virginia. They were held only a few weeks at the prison, during which they posed for portraits by different artists. On June 5, 1833, the men were sent west by steamboat on a circuitous route that took them through many large cities. Again, the war chiefs were a spectacle everywhere they went, and were greeted by huge crowds of people in cities such as New York, Baltimore and Philadelphia. In the west, closer to the battle sites and history of conflict, the reception was much different. For instance, in Detroit, a crowd burned and hanged effigies of the prisoners.
Near the end of his captivity in 1833, Black Hawk told his life story to Antoine LeClaire, a government interpreter. Edited by the local reporter J.B. Patterson, Black Hawk's account was the first Native American autobiography published in the United States. The Autobiography of Ma-Ka-Tai-Me-She-Kia-Kiak, or Black Hawk, Embracing the Traditions of his Nation, Various Wars In Which He Has Been Engaged, and His Account of the Cause and General History of the Black Hawk War of 1832, His Surrender, and Travels Through the United States. Also Life, Death and Burial of the Old Chief, Together with a History of the Black Hawk War was published in 1833 in Cincinnati, Ohio. The book immediately became a best seller

After that tour, Black Hawk was transferred back to his nation. He lived with the Sauk along the Iowa River and later the Des Moines River in what is now southeast Iowa. He died on October 3, 1838 after two weeks of illness, and was buried on the farm of his friend James Jordan on the north bank of the Des Moines River in Davis County.

In July 1839, his remains were stolen by James Turner, who prepared his skeleton for exhibition. Black Hawk’s sons Nashashuk and Gamesett went to Governor Robert Lucas of Iowa Territory, who used his influence to bring the bones to security in his offices in Burlington. With the permission of the Chief's sons, the remains were held by the Burlington Geological and Historical Society. When the Society's building burned down in 1855, Black Hawk’s remains were destroyed.

An alternative story is that Lucas passed Black Hawk's bones to a Burlington physician, Enos Lowe, who left them to his partner, Dr. McLaurens. Eventually workers found the bones left by McLaurens after he moved to California. They buried the remains in a potter's grave in Aspen Grove Cemetery in Burlington.

Black Hawk's pedigree with children will appear. At this point you will be able to move around and see his ancestors and descendants. If you have trouble, contact your ward family history consultant.

The following website in the internet site rootsweb has many life sketches of Black Hawk as well as a pedigree and descendants.